Alice’s Reverie is a visual novel following our protagonist, Alice.  Alice grew tired of being compared to the protagonist of Alice's Adventures in Wonderland as a child. Now, as a twenty-year-old struggling student and a closeted lesbian, she envies the fictional Alice's carefree childhood days. But when Alice suddenly finds herself in her own bizarrely normal version of Wonderland, will it be the magical adventure and fairy tale romance she's always dreamed of?

You choose who Alice will stay with; Wendy, Vee, Catherine, Lulu, Skylar, or Reese. Each route follows the descendants of the book characters and their daily life and struggles as Alice waits patiently until the day she can return home. 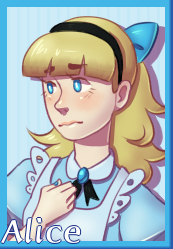 Alice is a kind and careful girl. She is able to adjust to whatever is thrown at her, even stumbling into an unfamiliar place. While she enjoys a bit of adventure every now and then, she also likes being at home with her sisters. 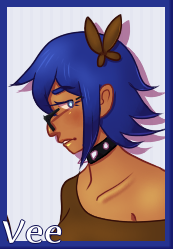 Vee is a calm and intellectual individual. She has a lot of walls put up, so she likes to be alone most of the time. But, she doesn't hate company. Most of her days are spent reading a book or keeping up her physique. 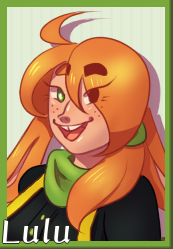 Lulu is a bright and cheery woman who has enough kindness to spare. She is known as the "mom friend" by her friends because of how hard she cares for their well-being. She will always lend a hand if someone needs one. 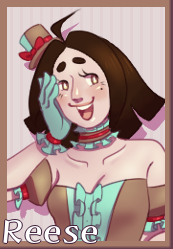 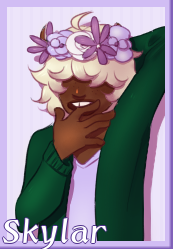 Skylar is a tired and snarky individual. They spend most of their time either sleeping or looking after their flower garden. Skylar's humor is very dry, but showing appreciation for it is the one-way ticket to their heart. 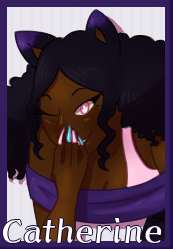 Catherine is a clever, playful woman. She weans her way into people's hearts with her flirtatious and flattering comments, but she has no bad intentions. Her strong intuition lets her know everything about someone. 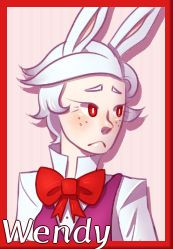 Wendy is a careful and bashful person. She is completely devoted to her work and tries hard to make everything perfect. Even so, when she is faced with an unfamiliar situation, she gets nervous and stutters to the finish. 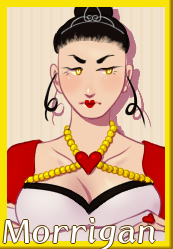 Morrigan is a wise and demanding woman. She is the crown Princess of Wonderland and the rightful heir to the throne. While she is less cruel than her mother, she is not afraid to deal out punishments as needed.

this is probably going to sound very rambly but this visual novel is absolutely amazing, one of the best i have ever played.

I started playing this like 4 months ago but after enjoying the 6 routes so much i didnt want it to end, so i procrastinated the morrigan route until yesterday. i just finished it (both complete endings) and just wow.

the quality here is amazing, all the art and character designs are phenomenal, and i love all the different characters and how theyre written. each route is a completely different story from the last, while still having appearances of other characters and a few things in common with the others making it fun to compare and really get to meet each character, that outside view of each one you get from routes apart from its own is amazing

and one last thing, THE AMOUNT OF CONTENT HERE WOAH

most visual novels take me about an hour and a half to finish, this one has taken me about 3 hours PER CHARACTER OUT OF 7 CHARACTERS. most vns dont have a fully fleshed out story or do but the ending feels too rushed, you dont get to see any epilogue or domestic view of the characters after. this one has that for every single one in multiple endings for each. its simply amazing everything thats in here, thank you so much for making such a perfect visual novel

Oh my gosh???? We're glad you loved the game so much and we're so touched with all you wrote about it!!! Literally going to re-read this for hours.

it was really cute. I just found it again after searching from my collection <3 I enjoyed it

Hey, I'd really love to play the game, but for some reason it won't let me install? Not trying to complain or anything. Just trying to figure out if there is something I can do to fix the problem, or if anyone else has experienced errors while trying to download.

What type of computer do you have? Were you able to get to the downloads page for the game? I can help try and figure out what's goin on since I don't normally hear of anyone having problems with downloading?

It's a PC. When I click install a screen comes up that says "Cannot read property 'build' of undefined

seems like that’s an error from the itch client, are you trying to download it from there? I would suggest downloading the game from the itch.io website instead and see if that works!

Okay,. Thank you, i'll try that

Edit: It worked, can't wait to play. Thank you for being patient with me. :)

I'm not done with the whole game yet but!! This has been really fun so far :D i'm already attached with most of the characters, and the stories just really well written in general!

Thank you so much!!!!! It's good to hear that someone loves them all  since they're all very precious to us ^_^

I'm so in love with everyone, it's a really incredible game! 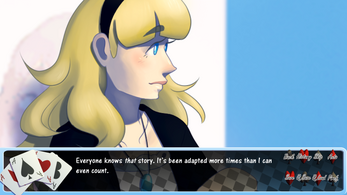 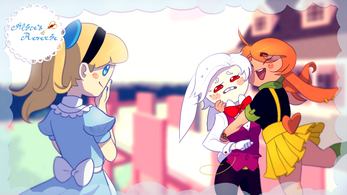 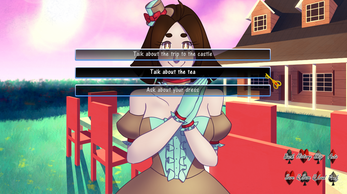 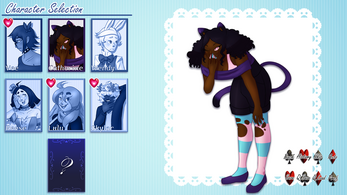 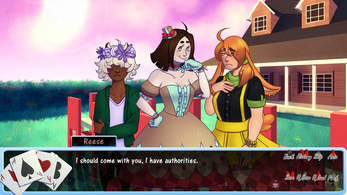 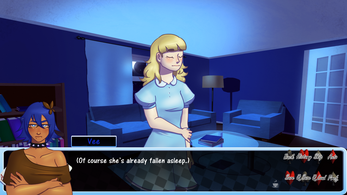 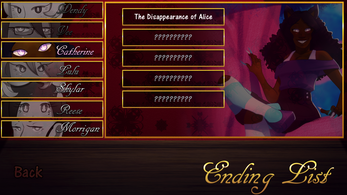